The present lot is the well-known and much-beloved face of Chicago's Wishbone restaurant. The southern cuisine staple opened in 1990 as one of the first chef-owned independent restaurants in the city and attracted many artists and creatives of Chicago. Jim Ladwig became friends with the owner, Joel Nickson in 1990 and loved the art in the restaurant, which was done by Joel's mother, Lia. The smiling (or, perhaps, snarling) dog belonged to the family of Greg Nickson and became the unofficial mascot for the eatery. 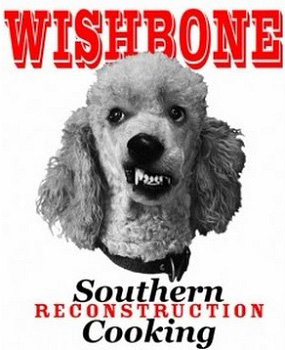 The Wishbone poodle would later be used by Jim on the hood of his Porsche 911, both to pay homage to his favorite Chicago restaurant and to break the concentration of his fellow racers.