An Icon of Modernity

Walter Dorwin Teague’s Sparton Nocturne radio, model 1186, was unveiled at the New York Radio Exposition in September of 1935. Billed as “The Style Sensation of the Radio World” by the firm’s advertising campaign, the Sparton radio encapsulated in its design the ground-breaking architectural innovations in glass and steel of the modern skyscraper. Standing over four feet in height, the construction portrays the vibrant energy and speed of the era.

The large midnight blue Tufflex mirrored glass radio was the most daring of four designs Teague created for Sparton in 1935 for their 1936 catalogs. Embracing materials of the industrial world, Teague’s Nocturne radio elegantly transforms a utilitarian object into a work of art; it was, as Alastair Duncan writes, “The ultimate icon of modernity, one grammatically ahead of its time.” Marketed to a high-end market and intended for posh interiors, hotels, theaters or other similar venues, the deluxe Nocturne cost $350-$375 (or nearly the cost of an automobile) and was a large investment during the Depression. 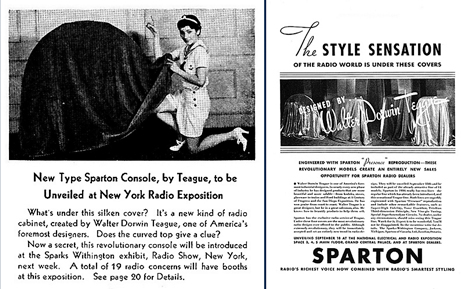 A Sparton advertisement published in 1935

It is unknown how many examples of the Nocturne radio were produced, but as a result of the original high price and the fragility of the materials few are known to exist today. Aside from the present lot, other examples can be found in a few private collections and a handful of museum collections including the Dallas Museum of Art, the Los Angeles County Museum of Art, The Wolfsonian—FIU in Miami Beach, the Minneapolis Institute of Arts and the Philbrook Museum of Arts in Tulsa.

We are not building big and little gadgets—we are building an environment.